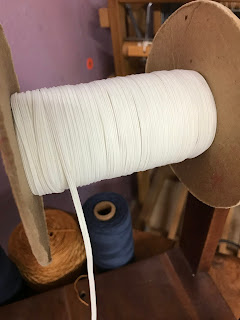 A few days ago, I read about a good way to secure Texsolv heddles on the open shaft bars on my Swedish type counterbalance and countermarche looms.

The shafts are two separate wooden bars with holes in each end to thread a string from end to end. The reason for the string is to maintain the order of the heddles if any were to accidently fall off the bar.

After adding or subtracting heddles, I would sometimes not tie the security strings back through the holes, mostly due to laziness but I blame it on my arthritis in my fingers.

I have no excuse now with this method. It involves using elastic bands instead of string.

I used a roll of elastic I had in my stash from doll clothes making days.  It is about 1/8" wide. I cut two lengths approximately the length of a shaft bar. 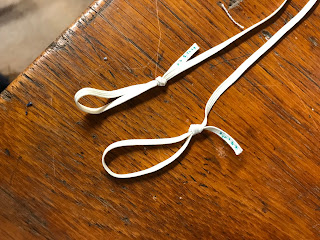 I tied a loop at one end of one elastic and kept the other as a guide to cut the rest of the bands.
I put the first one on and adjusted the length so it had to stretch slightly and tied another loop at the other end. I needed to trim a little off the band to make it fit, so I trimmed the same amount off the second elastic. 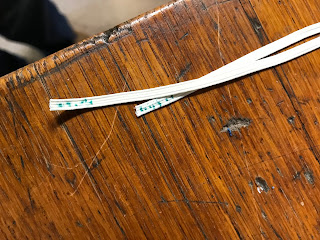 I marked both ends of my guide so I would be consistent in cutting the other eighteen pieces. 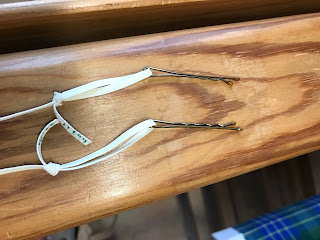 After tying loops on each end of all the remaining elastics, I started putting them on my shafts.

An easy way to thread the elastic through the end holes is to use a bobby pin. 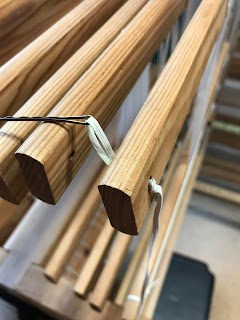 Thread the loop through the end hole. 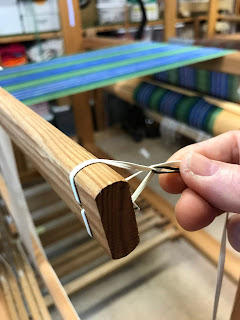 Wrap the loop around the end of the shaft bar and remove the bobby pin. 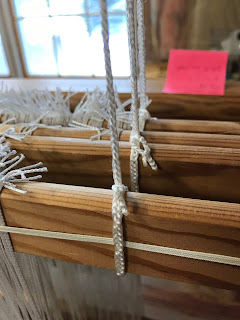 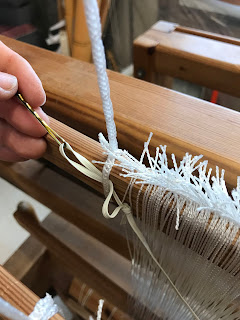 With the other bobby pin at the other end, thread it under the strings holding the shafts. 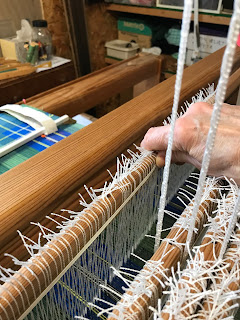 The elastic needs to be against the
heddle loops, so don't go over the
jack cords.

Thread the loop through the hole at the other end and stretch it around the end of the shaft bar.

I keep a few bobby pins in my tool box, for threading the loops if I ever need to change my heddle numbers.

There is no excuse now to not secure the heddles, since I don't have to untie knots any more. The elastic slips on and off with ease.

Jenny Bellairs
It has been a dream of mine to learn weaving, ever since I was a child. My opportunity came early in 2005, when my sister-in-law let me borrow her countermarche loom. I had a couple friends help me understand the loom and get me started. Those first couple projects were exciting for me. I realized there was a lot to learn, so I signed up for Weaver's Boot Camp at Heritage Spinning and Weaving, in Lake Orion, Michigan. The class was great, I met a wonderful circle of weaving friends, and it pushed me into areas that would have taken me years to explore if I had been learning on my own.